EXCLUSIVE INTERVIEW: STAR OF ‘THE SONG’ ALI FAULKNER Discusses the sweet and powerful scenes of the film

Actress Ali Faulkner chats exclusively with Outersparkle.com about her soon to be released film THE SONG.Some may recognize Ali Faulkner from her role as “Bianca” in The Twilight Saga: Breaking Dawn part 1. In Ali’s latest role she takes on the character of Rose Jordan, In this music-driven love story THE SONG out in theaters September 26,2014

THE SONG inspired by The Song of Solomon is a music-driven romantic drama that addresses real-world relationship issues like dating, romance, intimacy, conflict, restoration and the cultivation of true commitment, all the things we pursue. Aspiring singer-songwriter Jed King is struggling to catch a break and escape the long shadow of his famous father when he reluctantly agrees to a gig at a local vineyard harvest festival.  Jed meets the vineyard owner’s daughter, Rose, and a romance quickly blooms. Soon after their wedding, Jed writes Rose “The Song,(awaken love)” which becomes a breakout hit. Suddenly thrust into a life of stardom and a world of temptation, his life and marriage begin to fall apart.

Q- Can you tell me a bit about your role as Rose Jordan?

AF-Rose is lovely young lady that works at her families vineyard family is very important to her. She lives and works with her father on the vineyard. She meet Jed, who’s character is based on Solomon, at the harvest festival they have every year. He comes to play a gig there, and they fall in love in a very sweet and romantic way. They have a beautiful romance and get married.

At first hes a struggling musician after their marriage, there love inspire him to write what ends up to be his first hit song. From there hes thrust into the world of fame and fortune. At first its a great thing and they are enjoying it together and she is proud of him,but than life starts to take a toll. Him balancing his family and his career life starts to become difficult, and he is thrust into a world of temptation. From there its about the struggling in their marriage, and trying to hold onto what is true and what is good and to find meaning and purpose and the truth in their love. She struggles to take care of their son and her aging father, all the things that come along with life while trying to keep their marriage together.

Janet– You all did a fantastic job at bringing the story to life on film, and it is a very relevant story that every one can relate to in their marriage or relationship.You don’t find alot of that, where your dealing with those everyday struggles of adultery, alcohol and drugs. But in a tasteful manner in a film where you don’t have to show all the “gritty” grittiness, that you can still go to watch it with your teenage kids and not feel like its inappropriate. Which can than lead to a great discussion.

AF– Yeah, Richie Ramsey the Director, he describes it real well,”knowing when to close the door”. Keeping it open long enough to see what leads up to those moments, In truth and make them feel real truthful and relatable and than know when to close the door to keep it tasteful, to be able to reach a wider range of audience. We wanted it to hit home with people, that they were seeing something they’ve experienced or known someone who’s experienced that.

Q- You spoke a bit about working with Richard Ramsey, can you elaborate about his direction in the film? 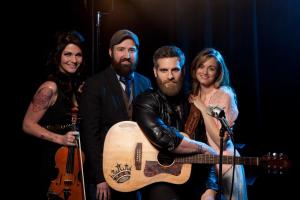 AF– It’s always very easy to talk about Richie, he is just hands down one of the most talented people that I have worked with. It was such an inspiring experience, he’s an incredible writer, he crafted in my opinion a script that speaks to people, and it spoke to me on so many levels. Even two years after filming, there are some moments that I think back to in the script or the scene and think “oh wow, that’s what that meant” and I understand it at a deeper level just by living a couple more years. On his ability to direct, I always say that he so easily was able to take whatever the actors have to give and make something good out of it. I had an incredible experience, largely due to Richard and his direction. It’s been a incredible blessing getting to know him and his family.

Q-Was this his first film?

I will take away, that relationships really are a gift and when they get hard you have to remember that.

Q- Which part of the film did you enjoy most or least, it can be a specific scene?

AF– I had alot of fun with some of the romantic scenes, the sweet scenes. There was one scene in particular, which didn’t require much from me but was fun. It’s when Jed sings to Rose, he improvised a song (split the baby)at the vineyard,(My Favorite scene>Watch it Below) the women love that scene and rightly so. Its great, its the first night that he’s met her,and he’s up on stage with an improvised song defending her from her ex-boyfriend Eddie(Landon Marshall) and wooing her into a date, which is brilliant! Alan Powell does it so well. I just remember Rose wasn’t supposed to hear that song ever, cause he just made it up on the spot,so I never heard him perform it till we shot the first take, but I remember getting to react to it so freshly and it was so much fun and see the cuteness of it. It was fun moments like that, that were lighthearted. There were also darker moments in the script that required alot,and i’m grateful to bring all aspects of the story to life.

Janet-For me I thought that was a brilliant little moment in the beginning of the film,and I thought that alot of the people would like it as well. It was funny and heartwarming, that he was wooing her in such an ingenious way.

AF– There is another moment that’s completely darker, there are some powerful scenes in the film, there is a little scene that was my favorite when I read the script, and i’m not sure that the audience would care near as much about it. There was a mystery to it, it’s when Rose goes to see him on tour after they have had a hard time. She brings her son, I don’t want to give to much away, but they have had their struggles and she just revealed a surprise. At that point he has got alot of hidden things that he can’t reveal to her. Just so many secrets and undiscovered things, like the moment they are in the bathroom and she sees his tattoo and he didn’t tell her about it. It wasn’t about the tattoo but it just made her wonder “wow, this is how separate we really are” he went and got a tattoo and I don’t get to know about it as your wife. It’s just a little thing in life, and it’s like a spark and your like “wow”, this is the moment that you see something so small that is a representation of something so much bigger. And that to me was just so powerful, that separation and her wanting to be so close, trying so hard to embrace him at that moment. It was such a mixture of feelings, it was just a small moment but a beautiful one for me.

Q- What do you want couples to take away from the film?

AF– That’s a great question, I always say that everyone is going to take things a little different way from where they are coming from in life, so i’d hate to say that someone should take it this way or that. But I would say that i’d hope they would take that relationships do have meaning, they do have purpose, that marriage is a beautiful beautiful gift. And I hope that the film inspires that to be cherished and more deeply appreciated, and inspires people to take care of their relationship and marriages. I also hope that it inspires them to search for meaning and that, that meaning is found in God.

Q- You are engaged, tell me something that you will personally take away from this film?

AF-I have taken away so much from this film that applies to my life. The most beautiful experience, and it just opened me up to the reason I wanted to do this in the first place, to find meaning in life! That’s what actors love to do, tell people truths, but when you get to do it and it teaches you something so profound its like a once in a lifetime experience. But what I will take away is that relationships really are a gift and when they get hard you have to remember that.In my opinion the only real way to keep a relationship is to have God in it,and knowing that there is something bigger. Too many things in this life can distract you and pull your focus, threaten to hurt you and your marriage. And if you don’t have that love to fall back on, to me it feels very difficult. And by that love I mean that unconditional forgiving love that God inspires to share with your spouse and with others. I have lots of friends that are atheist, couples that are married and have wonderful relationships, my opinion, I think that people can be unknowingly inspired by God. That their love and relationship even if they don’t believe in God, their hearts are open and receiving that type of love and to me that’s still God. God is powerful enough to still work in your life without you even knowing it. Just remember whats important and truly meaningful and what is lasting, to keep that in the forefront  of my life and my heart.

“LOVE IS THE POWER THAT HEALS – “THE SONG”