MIAMI GALS you no longer have to envy Kim Kardashian post pregnancy slim down. If you didn’t already know that KK recently celebrated her 33rd birthday. But instead of ANOTHER fancy car or Luxury Vacation, Kanye gifted Kim a State of the Art in home spa which included a state of the infrared sauna aka “The Slim Pod”.

Well Planet Beach Brickell has this “slim pod”, just 30 minutes in the pod can reduce toxins, inprove circulation, burn up  to 600 calories, reduce inflammation and strengthen the immune system.  I had the oportunity to try the Slim pod out for myself this week, and I have to say that I would definetly return for another round in the sauna pod. I was super surprised that I wasn’t sweating buckets by the time my session was over,as you traditionally would when you think of a sauna.

What I loved about the Planet Beach Spa experience is that its a self automated spa service, which is more convenient as well as more affordable with its low monthly membership. A few of the other spa services offered at this location are RED light therapy treatments, Dry Hydro therapy Massage table,The Cyber Relax Massage Chair,RED Fusion, Saunatox and Mystic Tan. Enter HERE the Giveaway for Planet Beach. 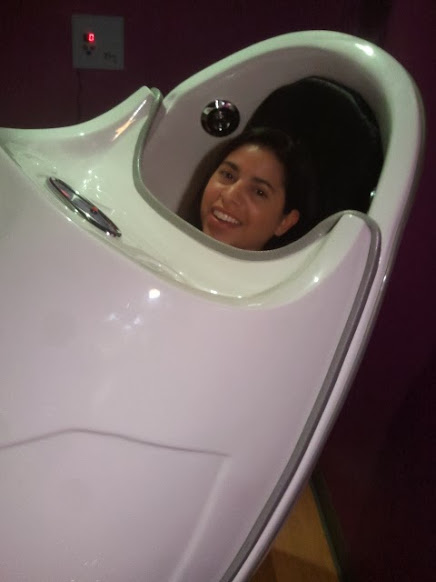 Planet Beach Brickell will kick off a two-day Mardi Gras meets Carnivale-themed Grand Opening event with an invitation-only VIP party on Friday, November 8th from 6:30pm-9:30pm. On Saturday, November 9th from 10am-3pm, Planet Beach Brickell will open its doors to the public for an open house with complimentary spa services. At 6:30pm, the spa will re-open for a Ribbon Cutting Ceremony followed by a big celebration complete with food, fun, entertainment and prizes, including a $1000 Grand Prize, that will be open to the public. The theme derives from the New Orleans roots of Planet Beach and the Latin culture of the Miami area. Planet Beach CEO, Chair & Co-Founder Stephen Smith is expected to be in attendance.
Planet Beach Brickell is located at 1060 Brickell Avenue Suite 105, Miami, FL 33131. For more information or to RSVP for the event, please emailplanetbeachbrickell@gmail.com or call 786-476-0970. An online brochure for the spa can be found at PBFL0195.digbro.com