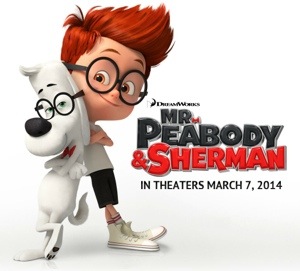 Mr. Peabody, the most accomplished canine in the world, and his boy, Sherman, use a time machine called the WABAC to embark on outrageous adventures. However, when Sherman takes the WABAC without permission to impress his friend Penny, he accidentally rips a hole in the universe and causes havoc with world history. It’s up to Mr. Peabody to mount a rescue and prevent the past, present and future from being permanently altered. “Mr. Peabody & Sherman” Travel in time and offer up a helping hand with history. From a visit to Leonardo da Vinci in the middle of his painting session of the Mona Lisa to King Tut, Marie Antoinette during the French Revolution and George Washington to name a few making cameos. Throw a runaway kid into a Trojan horse with King Agamemnon and you have a witty and comedic film the family will enjoy.

Last week I had the opportunity to preview the latest animated film by Dreamworks Animation, Mr Sherman & Peabody and have a quick round table discussion with The Lion King Director Rob Minkoff.

Q: Why did you get involved with the film?

RM:It was 12 yrs ago working on Stuart little, and the producer I was working with was Jason Clark he the recently produced the movie TED, he came to me and asked what I thought of Mr.Peabody and Sherman. And my response was that I love it!

RM: That was 1959 and I think they produced the show for 5 years. And I caught up with it when it was in reruns. But I remember that I would see Mr.Peabody and Sherman from before I could even talk, so these were characters that were in my blood. I thought that they were great characters, and I thought that the relationship was interesting. The fact that it was a story about a boy and his dog, and the dog is the boys father. It was just a fun crazy idea, and more than that the WABAC machine, I was super interested that he would be able to take him on time traveling adventures and go to these incredible places and meet these incredible characters. I think for myself when I was young, I hadn’t been exposed to any of these things cause it was before I was even in school.
This was my first history lesson and I didn’t even know what history was, but the ideas that they would go back in time and that there was someone there worth meeting. It was very intriguing to me, and it started my interest in history and it was one of my favorite subjects and was in part because of watching the show. It wasn’t about names and dates but about being able to go there and understand that people in history were alive and the reality that one day We too will become history. So history can be very compelling if you see it that way

Q: at what point in time in the writing process did they think it would be funny to go back in time and have the characters speak as we do in the 21st century?

RM: That was actually part of the original show it was one of the hallmarks of the show, In fact the accents the characters have are totally anachronistic, had nothing to do with the time and place that they were in but that was part of the brand of humor that Jay Ward was producing at the time,so we wanted to be true to the original in that way. So the characters are always slightly anachronistic.

Q: what lesson do you hope people take away from the movie?

RM: The movie, the fact ultimately that whether your a dog or someone else you can still be a loving father and good parent and have a good family that’s an alternative family.

Q:I’m glad you spoke of that, looking back at your body of work,and the presence of father figures and there importance it’s like a motif in your work. Do you think that added to the creative process?

RM: You know that’s very possible, the relationship that I had with my father had a very big impact on my life, he is no longer with us, something that I care about and think of.
In 1990 I was working in Orlando on a Roger Rabbit short cartoon and I had bought a car while there. I met my father in New Orleans and we drove back to California, we were some time on the road and it was a great experience. kids, I would think in general when you grow up you sorta see your parents in a certain way and then you start to see them differently as you get older and the connection I suppose that I had wanted or hoped for was always a struggle to achieve, so spending time like that with him was very meaningful.

Q: the film being of a father figure I thought it would have been a great film to release later in the spring closer to Father’s Day so that fathers and sons could go together.

RM: Hmm… Sure, maybe as a re-release or DVD. ” Give it to your dad on Father’s Day in Blu-Ray” David get that back to DreamWorks, Fathers Day Blu-Ray!

For me I thought that this would be a perfect gift for my boys to give to there dad for Father’s Day, there was so much adult innuendos and comedy that had me rolling, so I loved it.

Q: how would you describe Mr.Peabody as a parent?

RM: Well Mr.Peabody is exceptional in so many ways, he’s a master of so many things. Except when it comes down to being a parent that’s what he struggles, and the movie really is about the challenges that he faces dealing with a child. Children are highly unpredictable, and Mr.Peabody can use his superior intelligence to predict almost anything except what children will do.

Q: Can you tell me a little about the collaboration with Danny Elfman, he did the score and it seems so unlike his other work.

RM: It was an interesting thing, I was hoping to work with him for many many years, and he was talking to DreamWorks on a variety of projects but this is the one he was most interested in. He has a signature to his work but I didn’t want his score for this film to be like those that’s he’s done with Tim Burton cause this film is different in tone and style. And he seemed to embrace it very well.

Q: I loved Agamemnon, was there actually someone in the Trojan war with that name? What inspired you to make that scene and to make it so humorous?

RM: Yes there was, I think the version of the movie before that had Ancient Rome,and we realized that we needed a scene that Sherman could run away. And the basic idea was that the soldiers were like fraternity brothers,acting in a super machismo way so it was just funny for us to have Sherman, still a child and not capable of any of it think that he can go and join the army. And the Trojan Army none the less.

Q: what was it like working with 2 of the stars from Modern Family Ty Burrell and Ariel Winter?

RM: You know it was interesting, when we hired Ty and than hired Ariel later it was kinda hard to find someone who could play the role kinda right. You know she’s Sherman’s friend but she starts off as his enemy and they become friends over the course of the story. So we needed an actress that could deliver that sorta edgy sharp comedy in a way that you would still like her character. So that was the most important thing, you had to like her to root for Sherman and Penny to get together. So that was more of the individual choice of why we hired Ariel, and that she happened to be in the show with Ty was just a great coincidence.

Q: was there any apprehension from the studio when they read some of the early stuff with the bullying, and to see that the bully is actually played by a girl?

RM:Very interesting, I think that bullying as a national issue, has sorta emerged in the time frame of the movie. So there was definitely some time that we looked at the sensitivity and concern of doing the right thing and the wrong thing in the story telling. And we all realized that bullying is very real and part of the society that we are in and is something that needs to be changed and stopped. That was the point if view that we had making the film,and a more painful moments in the film cause it’s very real. Ultimately that they overcome it and become friends is maybe the message.

Q: if you could travel back in time where would you go?

RM: I would go back to Liverpool in the early 60’s to see the Beatles perform, since now there’s only 2 Beatles left if I had the WABAC I could see all 4.

Q: how do you compare the difference in working with DreamWorks to that of Disney?

RM: It’s very different, Disney was twenty years later and animation has changed with 3-D computer animation and graphics. When we made the Lion King and films up to that time was in traditional hand drawings. Although still today we still use many artist to draw, but much of that drawing is done on a tablet and the tools we use are different. The production animation still hasn’t changed, we still start from a screen play in some form of development. We never get a screen play that can go straight to being filmed,like you would in live action where you go out and shoot it than go and cut it in the editing room. Followed by visual effects, but in animation you start with the script than go to story boards and many times the story will evolve as we are putting it together, as it happened in this film as it did in The Lion King. In the scene when Rafiki gets hit over the head, we needed a way to come with an idea late in the production and that was a joke.

Q:will there be a sequel?

RM: Well if they like it enough there will be a sequel. 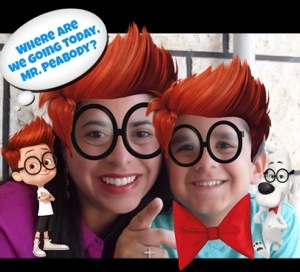