#REVIEW- “The Book Of Life” clearly NOT what you’d expect for a Halloween movie, It’s even better!


I had the pleasure of screening “The Book Of Life” last week with my family, needless to say my Autistic 6 Year old was very excited. He’d been seeing the films trailer on television for weeks now and kept reminding me each time he saw them. One of the big attractions for me in viewing the film was the exuberance of vivid color in the art and attention to details of the traditions found in latino culture. Hispanics are the fastest growing demographic, so it’s about time that an animated film was marketed to them.

The Book of Life opens in theaters on October 17,2014 rated PG

Adults and kids alike exploded in laughter (especially mine) throughout the film. Book of Life is filled with Mexican Folklare, mythology, a pet pig and pop cutlure nuances. To say the least, this is not your typical Halloween flick, it’s way better than that! DON’T expect anything remotely similiar to your typical Halloween film,as no monsters, witches, goblins or ghouls were cast, just fiesta filled calacas. DO expect a film filled with strong female leads, epic fiestas, un-ending churros, beautiful images,amazing music and empowering messages of selflessness, love, friendship, forgiveness, compassion and Família. Although the films canvas takes place on the hispanic holiday “Day of the dead” this film celebrates the lives of those who have passed rather than like the american counterpart which is more about the scare.This animated love story with its unique beauty will become a classic, as it celebrates culture and remembering loved ones who have died as well as encourages positive boy and girl role models. My 6 year didn’t find it scary at all, and was very amused by the few rude humor moments, we liked it so much we saw it twice! Truly worth going to see.

The Book of Life is an intricately designed animated film based around the Mexican Dia de Los Muertos or Day of the Dead holiday. The film begins with a tour of a museum with Mary Beth (Christina Applegate) as a guide to a group of misfit kids. She has something special for them, as she introduces the story. Set in San Angel and inspired by turn of the century Mexico, this is the home of 3 bestfriends. Manolo (Deigo Luna), the main hero, is a guitar-strumming bullfighter who wears his heart on his sleeve, Maria (Zoe Saldana) is the strong headed, smart, feisty and non-damsel in distress while Joaquin (ChanningTatum) is the mustached, full of swag, super macho hero. A love triangle unsues when Manola and Joaquin try to capture Marias love. 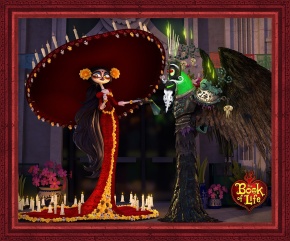 Amused by the friends, the married rulers of the underworlds, La Muerte (Kate Del Castillo) ruler of The Land Of The Remembered and conniving Xibalba (Ron Perlman) rules over The Land Of The Forgotten, make a wager to see who will win Marias hand. La Muerte bets on the sensitive and decent Manolo and the devious Xibalba bets on the vain Joaquin and secretly gives him a medal that grants him strength and courage.

Maria is sent of to europe as a child by her father and returns an adult. Pretty much picking up from where she left off with her sweethearts. Both Manolo and Joaquin now men, Manolo following in the Sanchez family tradition of bullfighting and Joaquin has become a heroic bandit fighter.

Maria has always had a sweet spot for Manolo, so Xibalba tricks Manolo into thinking Maria is dead, and offers him the opportunity to reunite with her. Manolo wakes up in The Land of the Remembered one of the three worlds, which is where he embarks on his journey on a mission to get back to Maria, but he will need help from La Muerte and his ancestors to getback to San Angel. 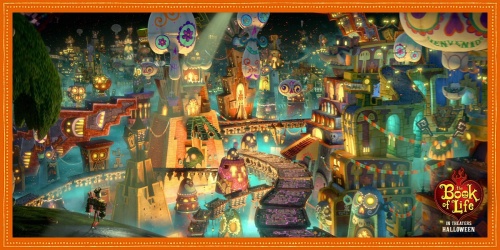 Animator Jorge R. Gutierrez makes his Directorial debut with The Book Of Life, alongside him as producer the acclaimed Mexican Guillermo Del Toro. Gutierrez, whos love for his Mexican Culture inspired this visually stunning love story. In collaboration with REEL FX Creative Studios and 20th Century Fox, the film brings a new perspective to 3-D animation. Add in the creative musical soundtrack with new music from award winning score-writers Gustavo Santaolalla and Paul Williams, on top of remakes of Mumford and Sons “I will wait”, Radiohead “Creep” and Biz Markie “Just a friend” to name a few, we have a Hit!

Other voices you may recognize include Ice-T, Héctor Elizondo, Cheech Marin, Gabriel Iglesias, and Danny Trejo.