I hope you’ve had an Amazing Christmas thus far. Like me and my family, many of you like to head out to the movie theaters as a family on Christmas Day. And the movie studios make sure to release some great choices on December 25, so here are a few that made my Yuletide list of “Must see” films that can be enjoyed with most of the family.

What My Husband and I want to see

UNBROKEN A true story of resilience, survival and redemption. The film follows the incredible true life story of Louis “Louie” Zamperini. Angelina Jolie has already earned four nominations including one for best picture and best director in the Critic’s choice and SAG awards. I first heard the true story while listening to Louis Zamperini speak at Harvest Crusade, not knowing it was to become a film, but knew it had been a best selling Christian book written by Laura Hillenbrand. I do have to say that I took to Twitter when I heard that the film would not include Zamperini’s Christian Faith, which truly brings his whole story together. UNBROKEN is an epic drama that follows the incredible life of Olympian and war hero Louis “Louie” Zamperini (Jack O’Connell) who, along with two other crewmen, survived in a raft for 47 days after a near-fatal plane crash in WWII – only to be caught by the Japanese navy and sent to a prisoner-of-war camp.

Louie passed away this summer at the age of 97, and although the film only captures small elements of Zamperini’s Christian faith, I don’t think it will be a disappointing film for believers. The film is Rated PG-13 due to some language and content and opens Dec 25.

Exodus: Gods and Kings  The final film in “the year of the bible”This Biblical Epic retells the story of Moses(Chriatian Bale) freeing the Jewish slaves from Egypt’s Pharaoh. You’ll find that its not like the Ten Commandments we know from when we were kids, yes the story is still there only that this is a more graphic depiction of this New Testament story. Not a film you’ll want to see with the young ones, as some content my be to much (fighting, death), but suitable for 14+.

The film is Rated PG-13 due to some language and content and opens Dec 12.

Into The Woods This Disney film is based on the award winning musical by Stephen Sondheim and book by James Lapine. “Be Careful What You Wish For …” the one place you can find all your fairly-tail favorites but with a modern twist. This Rob Marshall film follows the stories of some of the beloved Brothers Grimm fairy tales, Cinderella (Anna Kendrick), Little Red Riding Hood (Lilla Crawford), Jack and the Beanstalk (Daniel Huttlestone), and Rapunzel (MacKenzie Mauzy)-all tied together by an original story involving a baker and his wife (James Corden & Emily Blunt), their wish to begin a family and their interaction with the witch (Meryl Streep) who has put a curse on them.This story is complicated yet compelling and would be more suitable for kids 10+ as it may be confusing and mildly scary for the younger ones expecting a “Happily Ever After” they typically find in other Disney films. This Film is Rated PG and open Dec 24. 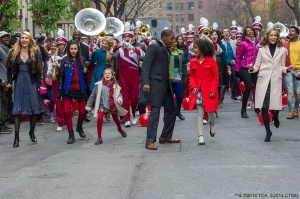 ANNIE This is a modern day version of the classic movie and musical of the Little Orphan Annie story (one on my old-time favorites), with updated music and a present-day New York setting. In this version, Annie (Quvenzhané Wallis) is a foster child who’s living with the vile Miss Hannigan (Cameron Diaz) when cell phone tycoon Will Stacks (an updated version of Daddy Warbucks, played by Jamie Foxx) saves her from being run over by a truck. His shady campaign manager (Bobby Cannavale) decides that Stacks needs a child to make him more human, so Annie leaves her hard-knock life for a penthouse apartment. Annie sings her heart out, goes to fancy Hollywood parties, and continues her search for her birth parents. This Film is Rated PG and was released on Dec 19

Night at the Museum: Secret of the Tomb This film is just a s great as the first two, Larry (Ben Stiller) again is on quest to save the ancient tablet of Akmenrah which stores the magic that has brought the exhibits in New York’s Museum of Natural History to life. Teddy Roosevelt (Robin Williams in one of his last roles) joins Larry Daley (Ben Stiller) the night security guard,and the rest of the gang Octavius (Steve Coogan) and Jedidiah (Owen Wilson) on a quick jaunt to London to find the secret from Pharaoh to save them all. My kids and I enjoyed it and would be best for ages 6+.

This Film is Rated PG and opened in Theaters on Dec 19.