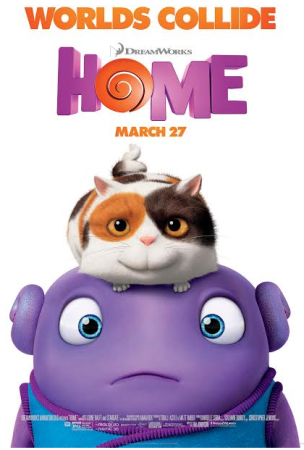 When Oh, a lovable misfit from another planet, lands on Earth and finds himself on the run from his own people, he forms an unlikely friendship with an adventurous girl named Tip who is on a quest of her own.

Through a series of comic adventures with Tip, Oh comes to understand that being different and making mistakes is all part of being human, and together they discover the true meaning of the word HOME.

Jim walked into the room with a little box of worry dolls he had recently been given, “not exactly sure how they work. I guess i’ll have to make up my own rules for them”.

Q-When you read the script, what about it caught your attention?

JP-the first thing I was sent before I was sent the script was a picture of the character, and I loved his little image. His face, his coloring, but I didn’t know if I would be the right voice for that. Its still a bit of a mystery matching a voice to an animated character. I was excited about it, I had wanted to do an animated movie in general. I knew Jeffrey Katzenberg somewhat socially before that, and I had wanted to work with him and his company. I took it as an exciting opportunity whatever the story was going to turn out to be. What was really neat was they would play me back short clips throughout the process, I found myself becoming more and more accustomed to hearing  my voice come out of him. But at first it was very disconcerting. The first couple of times seeing it, they were happy, so I knew that I didn’t need to worry but my instinct was “this doesn’t work, my voice doesn’t work for him”. So this little purple guy, who is frankly nicer than I am, it just doesn’t match. What’s interesting is that they animate closer and closer to You as you go through the process, and record you visually the whole time. Once I started to see his mouth move like mine and his eyes do things, I know I do that, I’ve seen myself do that on tv, than it really become one. Then I was really excited and I wanted it to work.

Q-You said that the character is nicer than you, are there any similarities?

JP-I think that overall i’m not as optimistic as he is but I think sorta optimistic like he is. I like being around people, not as much as he does, but I do understand it. Hes very friendly and eager to say hello and whether i’m still that friendly or not I don’t know, but I was voted class friendliest my senior year of High school, so apparently I was that friendly at some point in my life.

Q-Oh has so many great lines in the film, will you be happy to finally give “bazinga” a break?

JP– Right?  I like the bazinga trail, I really do, It doesn’t bother me. I just keep walking when I hear it in the street like I didn’t hear it.

Q-how did you find your experience working with director Tim Jones?

JP-Unbelievably good! On my first day of recording, I barely knew him Jeffrey Katzenberg came into the studio to say “welcome” and “good luck” and working on an animated movie is really unlike working on anything else. And part of that is that as an actor you will be very blind through the process. And its true, the script is ever changing theres nothing visual to ever work with other than one rendering of your character. You don’t really get to see your fruits of your efforts in any way to say “oh thats what we’re building on” its a long time before you can. If you think of Tim the Director as your seeing eye dog and trust him like your seeing eye dog I think you can really enjoy this. And boy was he right, the visual I can say is,every three to four hours i would stay in the recording studio with Tim, I would leave and the vision in my head would be we had just been in a black hole together and his voice was the only thing I had to work with. And that created the visions in my head, that created the movie in my head. And thats all I had to go on. What was fun was watching it all played back in partial animation or full animation and see sometimes how different things actually were, what they meant to what I was actually imagining, its incredible how different they can be.BUt it was work and a valuable lesson I think in that there are many different ways to see a situation, that are all valid that all lead to the same end.

Q-There are some great diversity in the characters, what do you hope children will take away from this movie?

JP-first I just really hope that children and their parents are really entertained but if there is anything to take from it , which is the same thing that snuck up on me during the process which was “Oh, we’re telling a story about the importance of not generalizing groups of people” this is a story of not coming in with preconceived notions of an individual based on the generalization of a group of people and that if you are able to keep all that at bay the very rewarding personal relationship you can form in your life. There are great gifts you can get from that, and these two really personify that. These two as the title suggest really end up developing a home together and a family together in a situation where in the beginning she had animosity towards him in the beginning. And he treats her as frankly a dodo bird. They are told that humans are basically an animal that need taming, give them some good food and eater and we can shovel them off their land. Neither of them turn out to be right in their preconceived notions, and find out that they love each other and have a lot in common.

Q-What was your favorite scene?

JP-I would say there was a lot of joy in the very simplistic back in forth between the bathroom stalls, with the “don’t eat the blue mint or drink the lemonade”. I think the reason I found that so satisfying was because any idiot could tell what the vision for that scene was, there was no mystery in my mind of what this scene looked like I knew exactly what this scene looked like.  I was able to play it a cleanly as possible, so thats the one thats sticking out. I will say all the car scenes were fun .

JP-its hard to say, the first thing I think of is wherever you go there you are, and the boov as a species they are always running from their enemy and it always catches up with them and its the same story again and again. So I guess if there is a lesson to that, quit running and deal with your issues right where you are and maybe you won’t have to keep running anymore. I’m no psychologist, what do I know!

Q–How was it collaborating with Rihanna and JLo?

JP-I didn’t get to work one on one with JLo very much at all, but I did get to spend a decent amount of time with Rihanna, and it was heaven. I’m a fan of hers anyway and I owned some of her music before I ever met her, so it was like “oh my god, shes here it’s her”. But I would say that it was really special being in what I would consider her environment, and getting to watch her work. Obviously it was not recording an album but recording a movie theres major differences but at the same time theres no doubt being around her, how comfortable she is in front of the microphone in that kind of situation. But anytime you watch someone whos a master and comfortable, it’s awe inspiring. On top of that when we got to do press together she was such a pleasure to talk to and to talk with. And when we’ve been interviewed together it’s been such a joy to have that team thing going, which came easier than I would have even imagined cause we didn’t know each other at all. We’ve had different experiences in life but like these characters there’s actually something in common something I can’t put my finger on.

Q- So the boov literally wear their emotions on their skin, do you have any ticks that give away your emotions?

JP-My eye will twitch when I’m tired, but thats not an emotion I guess, I have learned to control better when I start to get angry my mouth goes into a frown, which sounds simplistic but when you’re trying to make a valid point and not have somebody feel bad for you, it’s not handy. And the rest of them I don;t know but i’m sure the people that are close to me can rattle them off easily. Like I don’t know what I do when I lie, I try not to lie!

Q-What did you learn from this project?

JP-On a very technical level I found out how much I enjoy working on animation, and I enjoyed how much it reminded me of being a young actor again. Because it required so much imagination in your head, several times I had left the studio thinking “this is in essence why I wanted to do this career to begin with” and it made me more eager to do more animation.

Q- Do you find it more difficult to do animation than other roles you’ve played?

JP-I find that this was more sheer effort required than anything I have been asked to do recently and in many many years. And again its more technical an issue of having nothing but your voice at your disposal to help tell a story.