Season Finale! I’m so disappointed that the season has come to an end. But i’m sure we’ll be hearing of a season 2 soon enough for 2016. I personally loved viewing the bible come to life in A.D. and wished it had covered the complete book of acts. In the final episode, the best seen is with the roman soldier Cornelius, the conversion of the first Gentile,by far a very moving seen. What did you think of the series? Leave me your comments below, i’d love to hear your perspective!

The statue of Caligula is in Jerusalem, having been delivered to Pilate’s palace. With Caiaphas and Leah in attendance, Pilate warns that upon his decree, the statue will be escorted to the Court of the Women at the Temple. The only uncertainty is the number of deaths this will cause. Pilate is disappointed when Caiaphas insists he can’t help, which prompts him to bring up his “friendship” with Leah. Sensing a betrayal, Leah automatically says, “He’s lying,” just as Pilate explains she told him about the Ethiopians’ plot with the Zealots, for which he is in Caiaphas’ debt. Was Caiaphas not aware of this? Maybe Pilate owes him nothing after all. After a moment’s thought, Caiaphas claims Leah exposed the plot with his approval, but he remains untainted by her actions, thus giving Pilate no means for blackmail. The statue will never, ever enter the Temple. Pilate has but one a question: When his centurions march for the Temple, how will Caiaphas stop them?

The apostles discuss Jesus’ warning that the Temple will be destroyed, an act that will be followed by earthquake, famine and general troubles. Seems like a good time to literally head for the hills. James reports he’s been summoned to the Temple by Caiaphas. Barnabas thinks Caiaphas will ask them to fight, and they’ll be cut to pieces, but Simon and James reserve judgment.

For the first time, we see Cornelius wearing civilian clothes, praying. He has a vision of Joanna, who says, “In the name of Christ, I forgive you.” A crash of thunder sounds overhead, followed by a vision of the Angel, who instructs him to send men to Joppa to find Peter. Meanwhile, Peter is having visions of his own of various animals the Angel tells him are unclean. “But do not call anything unpure that God has cleansed,” says the voice. Moreover, there are three men waiting downstairs. Peter is to go with them without question, for they have been sent by God. When Peter spies three Roman servants, he smiles, amazed, and rides with them and Mary Magdalene to Cornelius’ home. Cornelius says that the vision of the Angel has convinced him to change his ways. When Mary asks about Joanna, Cornelius breaks down in tears. Mary knows Cornelius killed her friend when he collapses into her arms and then to the ground. Peter urges Cornelius to stand up. While he doesn’t know God’s plan for Cornelius, Peter must welcome him into the fold and baptize him. They join Cornelius’ wife, Candida, and three children, just as the wind picks up. Suddenly, words of prayer flow through Candida in Aramaic, then Cornelius starts praying in Parthian, their children and guards pick up the words in Egyptian, Libyan, Hebrew. “This is why we came!” Peter cries to Mary. “This is our mission.” Moments later, a freshly baptized Cornelius hugs Peter for dear life.

Caiaphas tells James about his plan to unite Jerusalem’s Jews to repel the barbarity of Caligula’s statue. James thinks this is a noble idea, but the apostles can’t help. Furious, Caiaphas threatens to decimate the apostles, which merely confirms James’ suspicions. Claiming the Nazarenes have no interest in anything other than themselves, Caiaphas screams at James to get out of his office. Afterwards, he summons Leah, whom he believes has drifted too far from God with her lies and manipulations. Starting now, Leah is wife to Caiaphas in name only, and she will go back to live with her family. When Leah claims he wouldn’t be High Priest if it weren’t for her, Caiaphas tells her to stop talking… because no one is listening. It’s dusk when Leah scurries through the streets to visit her father, Annas, and brother, Jonathan. She’s worried about Caiaphas, who has become irrational and violent, which is not behavior fitting a high priest. The Temple is no longer safe, so it may well be in their family’s best interest to remove him from office. But now that Caiaphas has united the Jews, Annas and Jonathan know he’s untouchable. Only death can rob him of his position. Leah should go back to her husband. When Leah leaves, Jonathan warns his father that she’s dangerous and will drag them down with her. “So what shall we do with her?” Annas asks.

Pilate pleads his case to a sullen, silent Claudia. If he refused to place Caligula’s statue in the Temple as ordered, he would be killed, a new man inserted in his place, and Claudia would be lost. He has no choice! When Claudia accuses him of enjoying it, Pilate’s sure she’s mad about Joanna’s death – merely a reminder that Claudia should stay loyal. “I will not dine with you and watch you gloat,” Claudia says. “Maybe you cannot win every battle.” Smashing Claudia to the ground, Pilate insists oh yes he can – and will – win. And she will be by his side at dinner as usual. 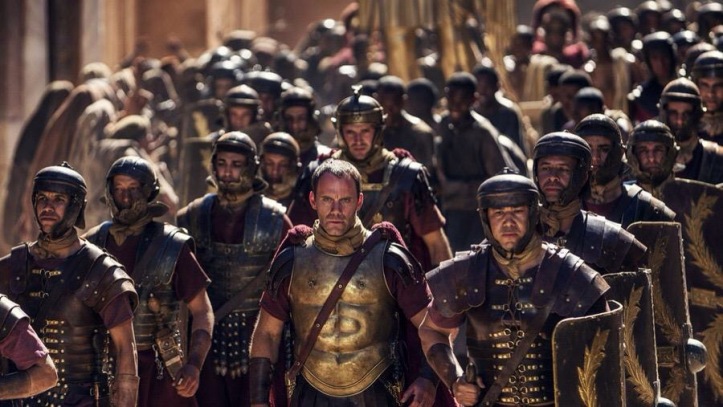 Cornelius and his family are rejoicing over their recent conversion when a guard enters to summon him back to Jerusalem to escort the statue to the Temple. Cornelius knows he must go, but when Mary asks what he will do, he promises to pray to the Holy Spirit for guidance. Peter and Mary escort Cornelius to the gates of the city urging him not to go. Nevertheless, he joins his fellow centurions who are readying for war, promising to rejoin the apostles afterwards. Meanwhile, Leah visits Eva to confess that the recent troubles are all her fault. Furious, Eva snaps her blade to the woman’s throat, so Leah switches gears, blaming Caiaphas for the betrayal of the Zealots. At the safe house, the apostles debate their next move, now that unity with Caiaphas is off the table. Peter insists now is the time to follow their conscience; if they do nothing to avert the impending bloodshed, they’re just like the Romans. Finally, the apostles decide to go to the Temple, determined to help in whatever way they can – except for Simon, who has armed himself and joined Levi’s Zealots.

Claudia bumps into Cornelius, who tells her the whole story of his dream and subsequent conversion. It’s a beautiful thing, and it could be an escape for both of them. “I think my husband is losing his mind,” Claudia says, asking for time to think. Cornelius promises his support for whenever Claudia might need it, then proceeds to meet with Pilate. Jerusalem must be taught a lesson today, Pilate says. And if the crowd impedes his progress, Cornelius is to kill them all. 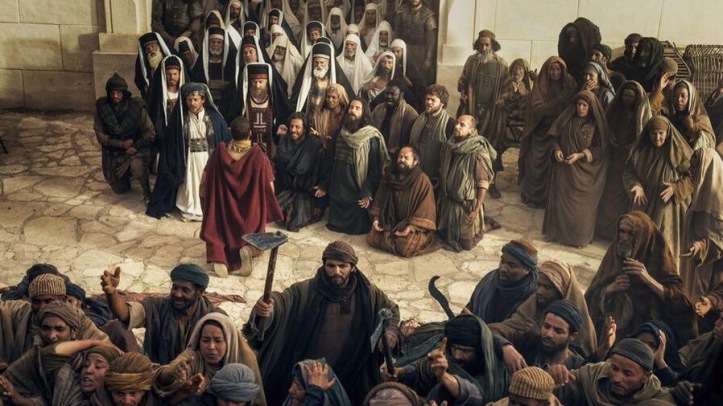 After months of anticipation, Caligula’s statue hits the streets, and it seems like the whole city has turned out to see what will unfold. Caiaphas and the Sanhedrin are dressed in full regalia, waiting in the courtyard, while Levi orders his men to stand by. Finally, Cornelius and Caiaphas stand face-to-face beside Caligula’s statue. Cornelius asks Caiaphas to stand aside, but he merely shakes his head no. When Cornelius draws his sword, Peter kneels before him, closes his eyes and begins to pray, then the remaining apostles follow suit. Caiaphas and the Sanhedrin kneel too, and Caiaphas bares his neck, telling Cornelius to do what he must, but there’s no way he can kill every man in Jerusalem. 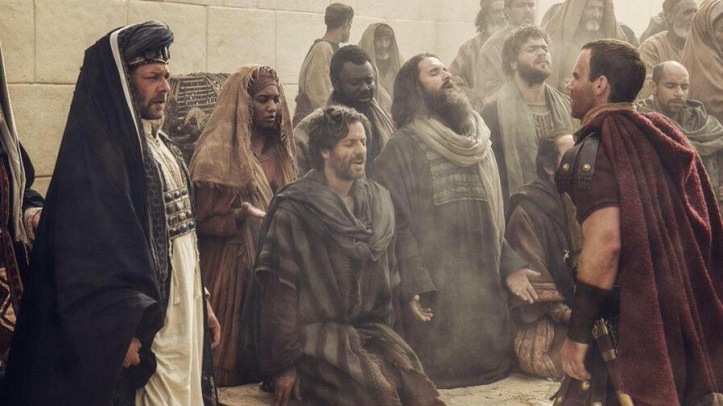 Everyone waits tensely, until Levi breaks the silence, giving his archers the order to commence firing upon the Romans. Cornelius stands as the killing unfolds. When the apostles begin reciting the Lord’s Prayer, Cornelius bends his knee and joins them. When it’s all over, the Romans have killed everyone except for those praying, and the statue of Caligula has been beheaded. Cornelius orders the men to take the statue back to Pilate’s palace, which is when Caiaphas is devastated to discover Reuben has been felled during the fight. Covered in blood, Levi rises to spy Eva amongst the dead, then slips away. The apostles take stock of the situation. Per James’ prediction, the prophecy didn’t come true today; the Temple is saved. When Thomas laments that Jesus did not appear, Barnabas points out that Cornelius kneeled before Peter, a miracle in itself. When Peter admits to baptizing Cornelius, the group is stunned to silence. 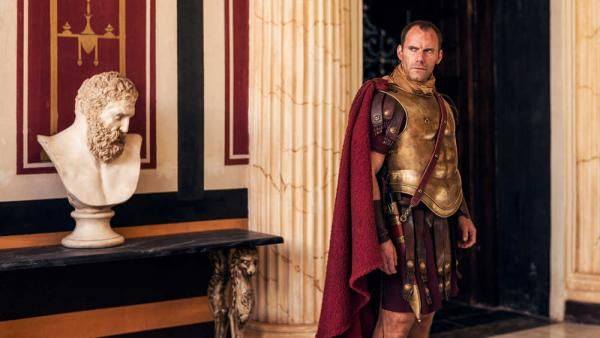 Back at the palace, Pilate beholds the head of Caligula, knowing the Roman emperor will just send another statue, then another. When he asks for Claudia’s thoughts, she asks, “What do you care?” and true to form, Pilate starts planning his next move, crucifying 40 women, etc. Disgusted, Claudia admits she loathes her husband and can’t bear one more moment in his presence.  She’s going to go somewhere Pilate can never find her… On her way out, Claudia bumps into Cornelius, who tells her he didn’t fight in the battle, and yes, if Pilate finds out, he’s dead for sure. Claudia suggests running away together, offering money for protection. But when he mentions his wife and children and tells her to run away for the sake of Jesus – Claudia will be so happy once she’s baptized! – she knows she has been a fool. As wife of the Governor of Judea, how can she run away? Just then, Pilate screams for Claudia. “He calls. I must go,” she tells Cornelius. Across town, Caiaphas finds Leah, throat cut, lying in a pool of her own blood. Back at the Temple, Peter and James are tending to the wounded when a furious Roman centurion puts his blade to Peter’s throat. Peter is to come with him… now.